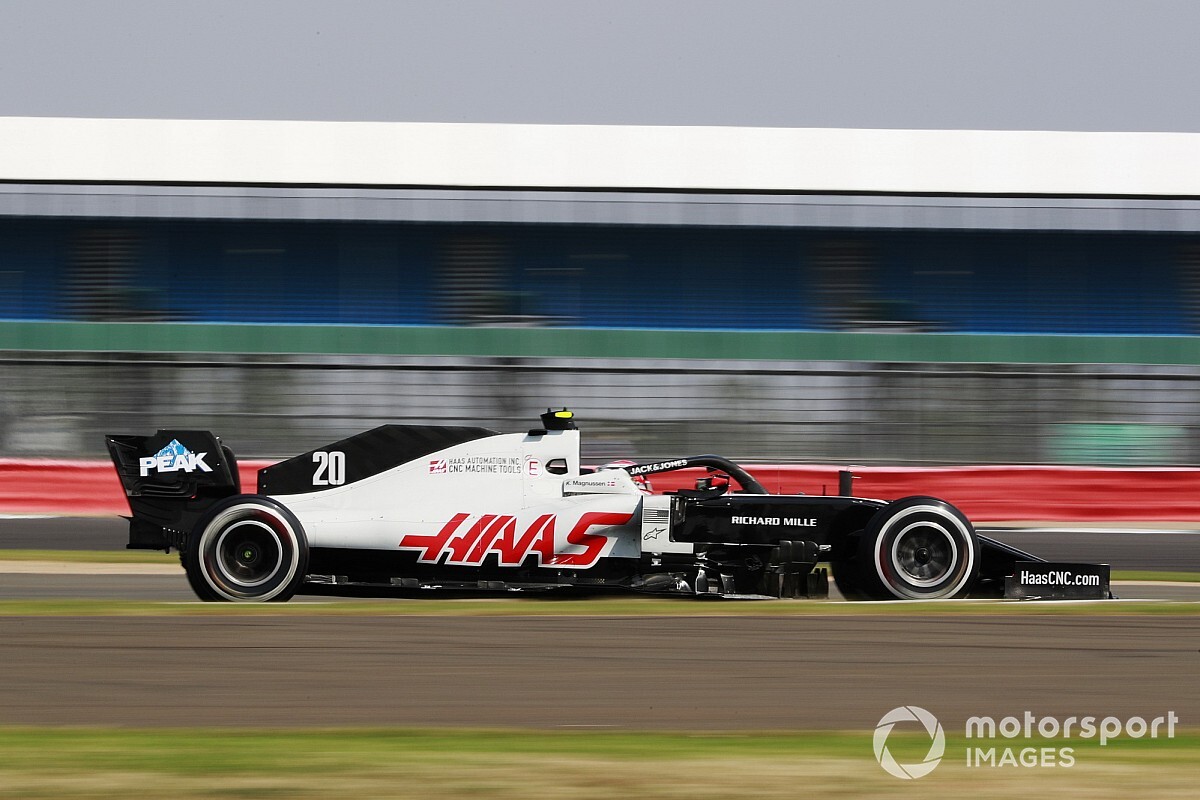 The Haas Formula 1 outfit retired the car of Kevin Magnussen from the 70th Anniversary for safety reasons because it was using up its tyres, Guenther Steiner has revealed.

Magnussen believes that his car lost performance because older parts were re-used after his heavy crash on the first lap of the previous weekend’s British GP.

In Sunday's race the Dane had made two tyre stops by lap 20, and retired after 43 laps following a long stint on the hard compound that failed to work out for him. He also received a time penalty for rejoining the track in a dangerous manner in front of Nicholas Latifi.

“Kevin just couldn't keep his tyres together,” said Steiner when asked by Motorsport.com. “He kept on wearing them out, and it was getting at some stage just too dangerous to keep on changing tyres. Just blisters, vibrations and we had to retire him for safety reasons, obviously.

“The softer tyres in the race, the high temperatures and the high pressure, I think the combination of that one was fatal. I mean, some people made it on a one-stop, but it was on the edge I think for everybody at the end. It was the same for everybody, and even Mercedes struggled, which says it all.”

Magnussen was adamant that something was wrong with his car.

“We had that crash on Sunday last week, and I think the parts that were put on for this race weekend, the floor etcetera, they’re old parts.

"I can’t really say what else it could be. In my mind that’s got to be it, because the car can be a lot better than this. It simply just wasn’t working this weekend.”

Steiner stressed that the team would do its best to address the problem in the short gap before next weekend’s Spanish GP.

“For sure we can rebuild the car,” he said. “But it's not only to rebuild that we also need to try to find out what actually happened, because otherwise you rebuild it, and then all of a sudden you're again in the same situation, and you keep on rebuilding it.

“But you need to have a good understanding of what happened from last week to this one. Nobody really knows what it is, we need to make sure of everything and we'll try to do the best we can in the few days you have available to make it possible, and otherwise you need to do it after Spain when the car gets back to the shop.”

“Some of the tyres came out completely differently than we anticipated, but then we have also to think that we increased the pressure as well. So it's a combination of things, and until we test the tyres on Friday, it will be difficult to make a prediction.

“I think what we are trying to do is get the best out of what we've got, nothing else. This season will be challenging, I said that from the beginning, it will be a challenging season after what we have learned after the first two races in Austria.”