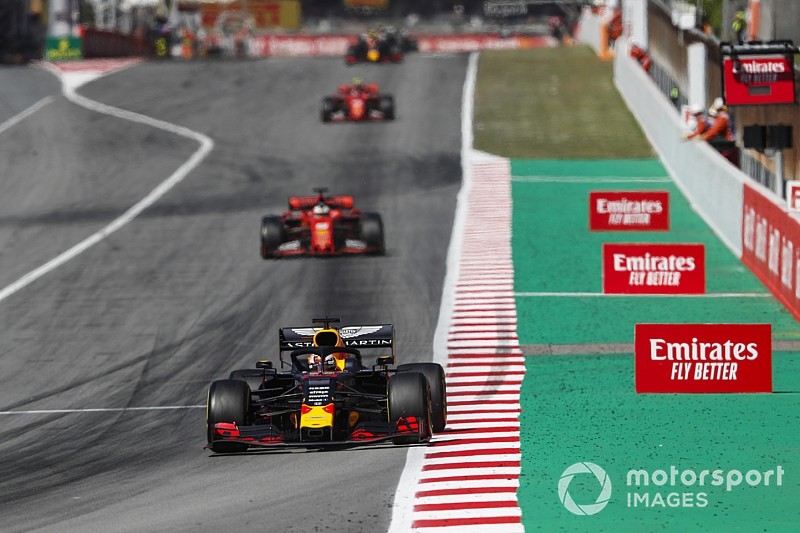 Verstappen passed both Ferraris on the opening lap to finish third in Sunday’s Spanish Grand Prix, earning his second podium of the season and moving ahead of Sebastian Vettel into third in the championship.

The 21-year-old has continued a rich vein of form that started in last year’s Canadian Grand Prix, when Verstappen bounced back from a series of early-2018 errors that culminated in a Monaco practice crash.

“Really in the last 12 months since Monaco last year he selected another gear and his performance has been phenomenal and he’s extracted every ounce of performance out of the car," said Horner when asked by Motorsport.com of Verstappen's recent progress.

“He races so strongly. It was a really intelligent first couple of corners and obviously a very brave pass on Sebastian around the outside of Turn 3.

“I think he’s really showing his maturity and composure and his consistency in the car. He was trading a tenth every lap [in the Spanish GP] and that’s been remarkable.”

While Verstappen’s consistency means he is back in the ‘best of the rest’ position in the drivers’ championship, his chance of a first title bid already looks slim thanks to Mercedes’ form.

Lewis Hamilton and Valtteri Bottas have established a major advantage in the standings after five one-two finishes in the first five races, leaving the likes of Verstappen and Vettel to fight over the final podium place.

However, Verstappen’s former team boss Franz Tost believes the youngster has matured to the point he would mount a championship assault if Red Bull can match Mercedes.

“He realised that he doesn't always have to go through the wall with his head,” Tost told Motorsport.com. “Now he's reached a level where he'll compete for victories and the world championship if everything comes together.

"He also showed super overtaking manoeuvres where you didn't get the impression that it was on a knife's edge.

“He really has this maturity now that makes it possible for a driver to compete for a world championship.”

Verstappen is excelling this season in the role of team leader, following the less-experienced Pierre Gasly’s promotion from Toro Rosso.

Daniel Ricciardo, Verstappen’s former teammate, left for the Renault team this season and Tost believes Verstappen’s progress was a key factor in that.

"Max is currently one of the fastest drivers,” said Tost. “I think one reason why Ricciardo left was certainly Max. Because he thought to himself: 'I won't beat him so easily anymore’."