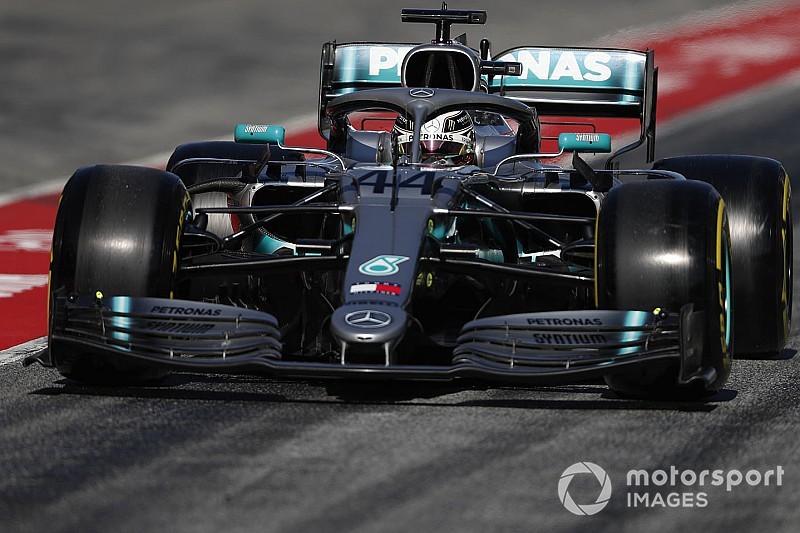 Ferrari driver Sebastian Vettel says he was "a bit surprised" to see Mercedes bring so many upgrades to the second Formula 1 pre-season test at Barcelona.

Mercedes admitted it was behind Ferrari after the first four days of testing but its W10 rolled out on Tuesday this week with a series of major aerodynamic updates.

The lead times required to produce a new aero package suggest Mercedes was always planning to produce a much more advanced concept for test two.

Asked if he had kept an eye on the Mercedes update, Vettel said: "Yes. You definitely look at it. That interests me too.

"I was a bit surprised that the car had so many innovations, but everyone chooses their own way.

"Of course, it's interesting what's happening here [in Barcelona], but it's only in Melbourne that we really get going."

Mercedes has won the last five drivers' and constructors' titles, but its performance in the first week of testing hinted it had tripped up over the new-for-2019 aero rules.

It lost time evaluating its new package because of an engine change, and has still not shown its true potential with two days left of testing.

Vettel said drivers would not be sandbagging in terms of their own performance but admitted three key factors would be disguising the true picture.

He said: "The questions you always have when you watch the others are: How heavy were they on the road? How much power did they use? How much was the battery discharged during the lap?

"These are the three factors that are unknown. We know the tyres, so that's not such a big question mark."

Vettel warned that the nature of pre-season testing meant he had not focused too much on what the pecking order might be.

"I haven't analysed the times exactly yet," he said. We have a few people with us who are better at that than I am.

"There are a few surprises. Alfa [Romeo] looks very good. At Mercedes it's hard to say exactly what's happening from our point of view at the moment.

"Some runs look very good, others less so. But that's all part of testing."

Why F1 cars have all gone size-zero