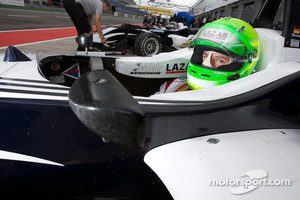 Kevin Mirocha will switch from GP2 to Formula Two this season after securing a last minute deal to join the F2 field for the 2012 season, commencing at Silverstone this weekend (14/15 April).

The 20-year-old raced in the F1 feeder-series last year with Ocean driving alongside Johnny Cecotto Jr. He recorded three top 10s before being forced to sit the end of the season out following an injury to his left shoulder.

The year before he contested selected rounds of the Formula Renault 2.0 NEC, winning the final race of the season at the Nűrburgring and finishing ninth overall. Prior to this he's been a regular podium finisher in the ATS Formula 3 Cup and Formula BMW, as well as enjoying several successful seasons in national and European karting.

"I am very happy to join the Formula Two field in 2012," said Mirocha. "The decision to race was made very late and that makes the whole project very exciting. My car will be painted white and red as the flag of Poland and I am glad to announce that I have received my Polish racing license today. I have a lot of fans in Poland who support my career as well as family where I grew up as a kid. I am sure that my GP2 experience will pay off but I understand that I will be racing against very fast drivers. The season will be difficult but interesting and I'm looking forward to the first race at Silverstone."

Jonathan Palmer, Formula Two Chief Executive, added: "I am delighted to welcome Kevin to F2. He proved in 2009 when he joined our winter tests that he's clearly very quick - indeed he went fastest overall at Valencia - and given his extensive single seater experience which includes GP2, I expect him to become very competitive as the season progresses."