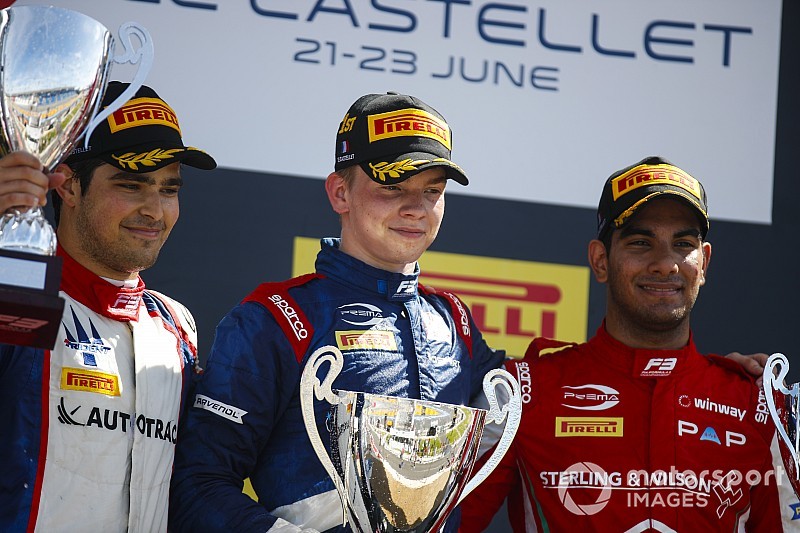 Reverse-grid pole-sitter Peroni led a group of five drivers in the first half of the race, with Shwartzman only sitting fifth early on.

The championship leader pounced five laps into the race by passing Bent Viscaal and Pedro Piquet in quick succession.

Then, as Yuki Tsunoda demoted Peroni to second, Shwartzman was able use DRS to move past both drivers at Turn 8 in one move and take the lead.

In the same moment, Peroni went off, narrowly avoiding hitting Shwartzman, and dropped down to fifth as a result.

Shwartzman quickly extended his lead to over a second over Tsunoda, the Japanese driver soon demoted by Piquet and Jehan Daruvala.

Daruvala quickly stole second from Piquet to form a Prema 1-2, but was unable to deal with Shwartzman's two-second lead.

Instead, Daruvala was soon attacked by Piquet, the Brazilian pulling off a DRS move on the penultimate lap.

At the front, Shwartzman won by 1.4s with Piquet and Daruvala completing the podium.

Tsunoda struggled for pace in the late stages and couldn't hold on to fourth, which was secured by Richard Verschoor (MP), who scored his first points of the season.

Like in Race 1, the third Prema of Marcus Armstrong was hit with misfortune as he stalled from third on the grid but he completed a superb recovery race to fifth, having significantly better pace than those around him in the final few laps.

The New Zealander gained an extra position after the race as Liam Lawson, who crossed the line fifth, was among several drivers to get five-second penalties, the Australian settling for sixth.

Jake Hughes (HWA) came from 25th on the grid to, along with Logan Sargeant (Carlin), finish in the last two point-scoring places.

Both drivers benefited from another penalty applied to Tsunoda, whose five second added to his time was for forcing another driver off-track.

Tsunoda was classified ninth ahead of Felipe Drugovich as long-time race leader Peroni had to settle for 14th.

David Beckmann retired with a puncture while fighting in the points as Niko Kari's race ended with contact, soon after he was given a drive-through penalty.

Fabio Scherer and Teppei Natori also went off, while Sebastian Fernandez retired in the pits and Simo Laaksonen also retired.