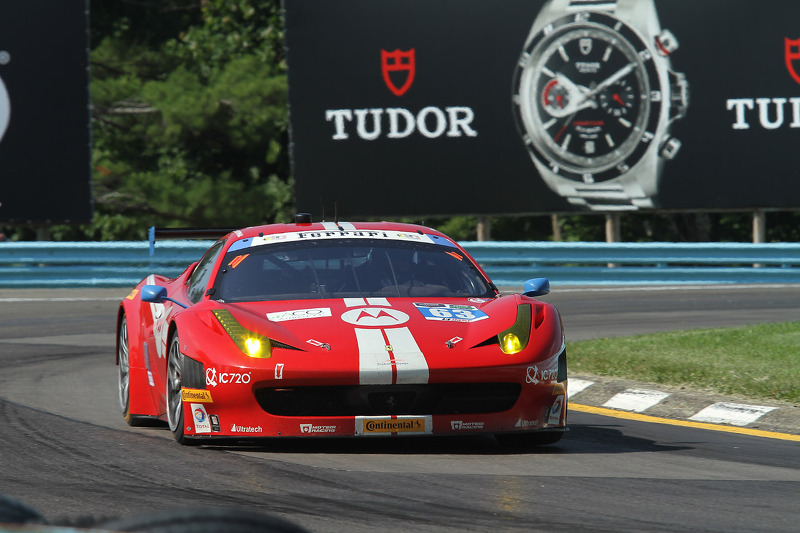 At Watkins Glen, no. 63 Scuderia Corsa Ferrari 458 Italia rebounds from two laps down to finish fifth.

Los Angeles, Calif. - An unfortunate incident led the way to a strong comeback performance by the Scuderia Corsa team and the no. 63 Scuderia Corsa Ferrari 458 Italia during Sunday's Sahlen's Six Hours of the Glen at Watkins Glen International in Watkins Glen, New York.

Meanwhile, Scuderia Corsa drivers in the Ferrari Challenge Trofeo Prielli enjoyed a strong weekend at Circuit Mont Tremblant in Mont Tremblant, Quebec, with a victory and three additional podiums on the weekend.

After the no. 63 Scuderia Corsa Ferrari 458 Italia qualified in tenth position in the GT-Daytona class by Alessandro Balzan, last season's Rolex Series GT champion, Jeff Westphal was tasked with the opening stint of the Sahlen's Six Hours of the Glen. Falling to twelfth position in the opening laps, Westphal guided the no. 63 Scuderia up to second position by the end of his double stint. Brandon Davis, joining the team for the first time, took over the Ferrari but immediately encountered trouble when he was contacted by another car during a race restart. The incident caused a flat tire, leading to time lost in the pits. By the time Davis was able to rejoin the race, the car had fallen two laps behind the leaders. 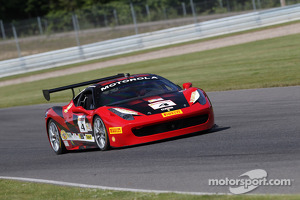 With a long stretch of the race run without a caution period, it was a challenge for Davis - and then Balzan - to make up laps to the leaders, despite strong pace from both drivers. Ultimately, Balzan was able to make up positions and a late-race caution allowed him to gain one lap back, with the Ferrari taking the checkered flag in fifth position.

"Today the no. 63 Scuderia Corsa Ferrari 458 was really good, and our Continental Tires worked well from start to finish," said Westphal. "The beginning of the race was a little bit hectic - I anticipated everyone to be a bit more cautions considering the duration of the race. We elected to sit back and see how things would unfold, and we were able to click off really good laps at the end of my stints. We were up to P2 and in a really good spot, and from them on, it was a rough day. Brandon was just in the wrong place at the wrong time, but we made the best of it. The effort was there, the team's precision was there, the pit stops were there, we just didn't get the luck."

Despite being caught up in the incident, Davis was upbeat about Scuderia Corsa's day at Watkins Glen and his first time at the wheel of the Ferrari 458 Italia.

"It was just an unfortunate incident," said Davis. "I had a car underneath me into turn one, which was fine, but then the car behind him braked way too late and took that car out, which took me out. When something like that happens, you are going to lose laps. From there it was trying to fight back. It's disappointing to finish fifth but it's a good feeling to be disappointed to finish fifth. I really enjoyed driving the Ferrari - it's a little different than what I'm used, but the car was very well balanced and was optimally prepared by Scuderia Corsa."

Balzan felt that the incident cost the Scuderia Corsa team a shot at the podium, but was happy with the team's performance to come back through the field and finish in fifth position.

"Jeff made a great, great start to the race and Brandon did an excellent job as well, but he was really unlucky when he was hit by that car," said Balzan. "It was also unlucky because we had a very good car to drive. I was pushing hard from the beginning until the end, and I want to thank the team because Scuderia Corsa gave me a very nice, very fast car. For sure, we could have gotten on the podium, but this is racing. When you consider the incident and the time we lost, I am happy with fifth position."

In Mont Tremblant, Scuderia Corsa driver Chris Ruud scored a victory and a third place on the weekend, while his teammate, Jon Becker, would finish in second position each day.

"Mont Tremblant turned out to be a fabulous weekend," said Ruud. "The team worked hard and the car got faster as the weekend progressed. The race on Sunday was a hard fought battle with my teammate Jon Becker where I got the jump at the start. The opposite happened in the race on Saturday. I am pleased with a third and a first, and four podium finished for the team and my points lead intact going to my home track at Road America in two weeks."

"As usual, my teammate and friend Chris Ruud and I had knock-down drag-out battle that literally where we were literally separated at times by hundredths of seconds," said Becker. "After all was said and done for the entire weekend we both gained a lot of points on the competition and neither of us gained even a single point on the other! Sharing the track with the Corsa Clienti is always fun, and Mont Tremblant is the perfect venue for the Ferrari Challenge weekend."

Team owner Giacomo Mattioli was thrilled with the performance of his team, which was competing at two different tracks in two different countries during the weekend.

"It was a very busy weekend for Scuderia Corsa," said Mattioli. "We are continuing to enjoy an incredible season in the Coppa Shell category thanks to Chris and Jon. They are developing a great, friendly rivalry - they are now even buying each other desserts to swing the weight balance in the car. In our TUDOR Championship car, our no. 63 car was clubbed by another car while running in second position, but everyone did a great job to limit the damages with a fifth place. On to the next!"

The next TUDOR Championship race for Scuderia Corsa will be the Mobil 1 Sportcar Grand Prix presented by Hawk Performance at Canadian Tire Motorsports Park in Bowmanville, Ontario on July 11-13. On the same weekend, the North American Ferrari Challenge Trofeo Pirelli will compete at Road America in Elkhart Lake, Wisconsin.