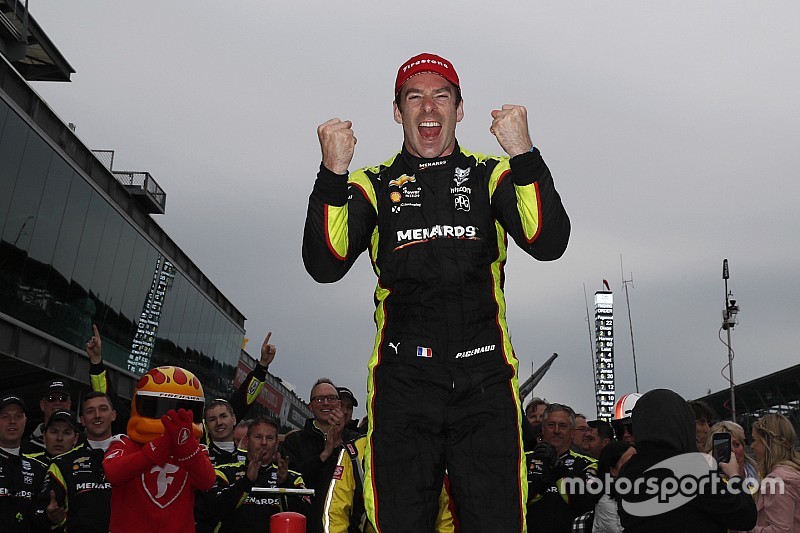 Behind Chip Ganassi Racing’s polesitter Felix Rosenqvist, Harvey in the Meyer Shank Racing with SPM-Honda went straight into second place around the outside of Dixon at Turn 1.

Coming down the front straight on Lap 2, Spencer Pigot who had made an excellent start from 12th, passed Pagenaud’s Penske to grab eighth and next time by the Ed Carpenter Racing-Chevrolet driver had also gotten around Power to move into seventh.

Power would lose eighth to Pagenaud, and was under pressure from Marcus Ericsson’s Arrow Schmidt Peterson Motorsports-Honda when the Swedish rookie lost it early in Turn 14, and spun sideways into the wall. Despite what appeared a big hit, the AMR Safety Team got the #7 fired up again, and Ericsson drove slowly around to the pits, but the damage was too extensive for him to continue.

The restart came at the end of Lap 15, and Dixon was all over Harvey and passed him for second, and when Rosenqvist locked up and ran wide under braking for Turn 1, Dixon was into the lead.

Herta was then closed out at the apex by Harvey, had to brake extra hard in avoidance and mount the inside curb where he was clipped by Jones into a spin and stalled. As he was sitting there, Hinchcliffe outbraked himself into Turn 1 and thumped Hunter-Reay into a spin during which he clipped Herta’s stricken car. The Canadian would serve a drive-through penalty.

The order at the next restart was Dixon, Rosenqvist, Harvey, Jones, Rahal and Pagenaud who had deposed Pigot. In eighth ran Sebastien Bourdais’ Dale Coyne Racing with Vasser-Sullivan Honda, having gotten around Power for eighth, while Takuma Sato had moved the second RLLR car into the Top 10.

Jones got a double draft from Harvey and Rosenqvist and outbraked both of them down the inside at Turn 1 to grab second, and Harvey completed the pass on the Swede, deposing him to fourth.

Sato got around Bourdais and Power but would later drop back behind Bourdais after a grassy trip. Power was then passed by IndyCar returnee teammate Helio Castroneves and Santino Ferrucci so fell to 12th, with suspected front wing damage, and he plunged as low as 15th before pitting.

The rain still hadn’t quite arrived so the round of stops that followed from Laps 24-28 were for more slick alternate compound tires. The early stoppers – Newgarden, O’Ward, Chilton, Leist, Hinchcliffe – were sitting pretty up front with Dixon leading Jones, Harvey, Rosenqvist and Pigot to complete the top 10. Pagenaud and Bourdais ran 11th and 12th ahead of the two RLLR cars, Castroneves, Ferrucci, Zach Veach, Power and Tony Kanaan.

O’Ward was doing a fine job of keeping pace with Newgarden in the damp conditions, and the pair ran 11sec ahead of Chilton who was under pressure from Hinchcliffe until the Carlin driver pitted for fresh reds. Dixon, who had gotten around Leist, moved into fourth which became third when the out-of-sequence O’Ward stopped for fresh tires on Lap 39.

Next time by, Newgarden, Hinchcliffe and Leist were in too, thus Dixon retook the lead, 8 seconds ahead of the battling Jones, Harvey, Pagenaud, and Pigot who had all gotten around Rosenqvist. The polesitter now ran sixth, which became seventh when Rahal passed him on Lap 42.

Jones, struggling with a missing wheel camber shim, and plummeted down the field and he pitted on Lap 43, along with the struggling Rosenqvist who had a brief flash-fire from the refueling process.

Up front, Harvey had slashed into Dixon’s lead, and by Lap 45 he was filling his mirrors, and Pagenaud was catching the pair of them, this trio 8.5sec ahead of Pigot – but then all four of them pitted on Lap 47. Penske jumped Pagenaud ahead of Harvey, who then had to work hard to defend from the warm-tired Chilton. Dixon-Pagenaud-Harvey now ran P8-10.

However, under this yellow, the rain started falling harder and all those who stayed out decided they had to pit. Newgarden’s crew lost a wheel that rolled across pitlane and just missed teammate Pagenaud’s front wing.

However, due to his wheel rolling out of his pitbox, Newgarden was assessed a penalty and would have to restart from the back of the field. There he would meet Castroneves, also sent to the back for work in a closed pit.

The restart with 18 laps to go saw Dixon check out, with Harvey holding off Pigot, and Pigot then being passed by Leist at Turn 7 and by Pagenaud and Jones through the Turn 12-13 sequence.

Two laps later, Dixon was four seconds in front of Harvey who was being pressured by Leist, while Pagenaud was up to fourth ahead of Jones. Pigot ran sixth ahead of Rahal, Ferrucci, Power and Rosenqvist.

Pagenaud was the fastest driver by around one second as he stalked Leist and Harvey, and passed the Foyt driver into Turn 1 on Lap 75. A lap earlier, Power had also made progress, passing Ferrucci for eighth place and leaving him to try and fend off Rosenqvist who had just passed Bourdais.

Pagenaud, in his best race for two years, was now pushing Harvey hard as Dixon was holding a 5.6sec lead and there were only 10 laps to go.

However, Pagenaud had only three push-to-pass boosts left, and Harvey had more than 40. But the Briton had to give way when Pagenaud used his last boost seconds and easily outbraked him into Turn 1 on Lap 80.

Dixon was 4sec ahead of Pagenaud at the end of that lap; next time by – despite Dixon using push to pass – the gap was only 1.8sec and the following lap, it was down to half a second. Pagenaud was taking yards off Dixon under braking.

On Lap 83 of the 85, Dixon ran wide into and through Turn 7, and and Pagenaud muscled alongside as they swept through the left-right-left sequence and then pulled away to win by two seconds.

Dixon retained second despite struggling with a lack of front-end grip, 1.7sec ahead of Harvey, with Leist grabbing fourth just ahead of Pigot who passed teammate Jones on the penultimate lap, while Power and Rosenqvist demoted Rahal on the final lap to take seventh and eighth.

Behind Rahal, Ferrucci held off Bourdais despite a wheel-banging moment between the teammates and claimed 10th.

Pagenaud: “It was incredible to see the pace we had in the rain”