Moto2 form man Alex Marquez says remaining in the intermediate class of grand prix racing next year is a "good option" amid the dearth of available rides in MotoGP.

Marc VDS rider Marquez, the 2014 Moto3 champion and the brother of five-time MotoGP champion Marc, has had a mixed tenure in Moto2 but currently leads the standings in his fifth season in the category.

He has been linked with potential premier-class rides at Pramac Ducati and LCR Honda for 2020, but both avenues now look closed - with Ducati pushing to retain an unchanged line-up at Pramac and LCR rider Takaaki Nakagami expecting an extension in light of strong recent results.

Avintia Ducati sporting director Ruben Xaus told MotoGP.com that the team is considering Marquez along with Lorenzo Baldassarri and other Moto2 frontrunners, and has been in touch with Marquez's management.

But, speaking after the Barcelona race, Marquez stressed he was in the dark over his 2020 MotoGP chances.

"I know the same as before the start of the race - nothing," he said. "It's so difficult to have a place in MotoGP.

Asked by Motorsport.com how important he felt it would be to end up on the MotoGP grid as soon as possible, Marquez said: "It's difficult because all the contracts are nearly closed. So make one year more in Moto2 is open, and it's a good option.

"For sure if I stay in Moto2, I will stay in this team, because I love the people, so it's the easiest way, and I feel so good, but we'll see, we'll see on the future what can happen."

Marquez's win in Barcelona was his third on the trot, leaving him seven points clear of nearest rival Tom Luthi in the standings.

The Spaniard said he used Luthi - back in the category for 2019 after a single year in MotoGP - as a reference point in adapting his riding style, but also credited his breakthrough to atmosphere in the team.

"We did some changes inside of the team, also to have a better friendship from the mechanics, from everybody, and this helped a lot, because we have a really good relation between everybody, also with my teammate [Xavi Vierge], and this is so important. 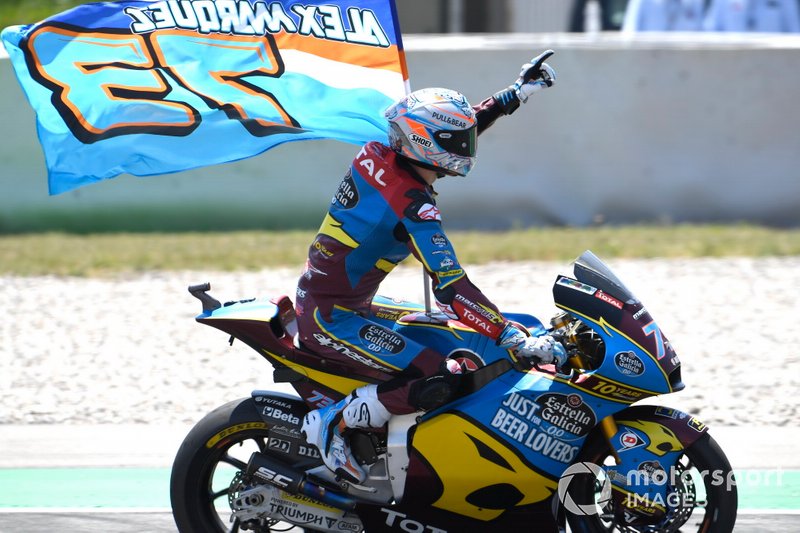