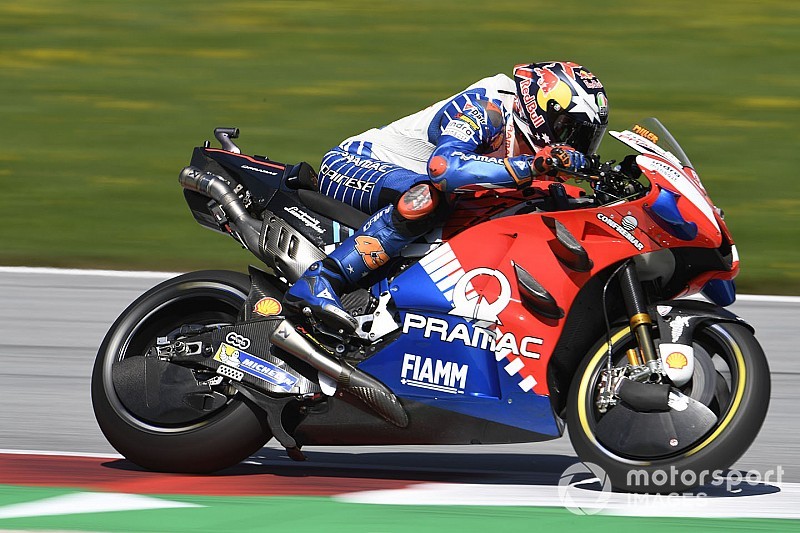 The Pramac Ducati MotoGP team has announced it will retain Jack Miller on a works-spec Desmosedici bike for 2020.

Miller had been at the centre of a major MotoGP transfer market saga at last weekend’s Austrian Grand Prix, during which it emerged that Honda’s Jorge Lorenzo was keen on taking his ride with the Ducati satellite team.

Some at Ducati were believed to be open to reuniting with Lorenzo at Miller’s expense, but Pramac was dead set on keeping the Australian, and Lorenzo ultimately opted to see out his current two-year Honda deal.

Miller has now firmed up a one-year extension to his current deal, and will ride one of the four Ducati Desmosedici GP20s in the premier class next year.

“Our main goal is to grow young riders and give them the chance to ride the factory Ducati bike one day,” team boss Francesco Guidotti said.

“Jack is proving to have great talent and his current position in the riders’ standings is confirmation of this. We are proud to have him with us also next season and we will now stay focused on our work to achieve even greater results in 2019.”

Johann Zarco’s shock decision to end his KTM contract early, announced on Monday, meant a factory ride was suddenly open for 2020, and Miller was viewed as the highest-profile contender.

However, the Australian had made it clear during the weekend that his first priority was continuity with Pramac.

“I am very happy to have reached this agreement,” Miller said. “Pramac Racing is a team that made me feel comfortable right from the start and the relationship with Ducati is very close.

“I will have again the official bike at my disposal and will do my best to achieve great results.”

Miller, the winner of the 2016 Dutch TT with Marc VDS Honda, has scored two podiums this season so far for Pramac, and occupies eighth in the standings, remaining well in contention to finish the season as top independent rider.

His Pramac extension, however, had been complicated by the fact rookie teammate Francesco Bagnaia had an upgrade to a works-spec bike locked into his contract for 2020.

With Miller unwilling to settle on older machinery, this meant Ducati and Pramac were forced to work out the logistics of running four current-specification bikes.

“We are really glad to have reached an agreement with Pramac Racing that will allow our factory supported team to field Desmosedici GP20 bikes for both Jack and Pecco [Bagnaia] next year,” Ducati sporting director Paolo Ciabatti said.

“It will be the first time that Ducati will have four identical bikes in MotoGP, two for the factory Ducati Team and two for Pramac Racing.

“This exceptional effort will help us to collect and share more information and improve the development process, with the aim of obtaining even better results and stimulate a fair and positive competition among our riders.

“We are very pleased that Jack will continue with us next year, because he has shown continuous progress since he joined us in 2018, and want to thank Pramac Racing for their continued commitment to Ducati.”