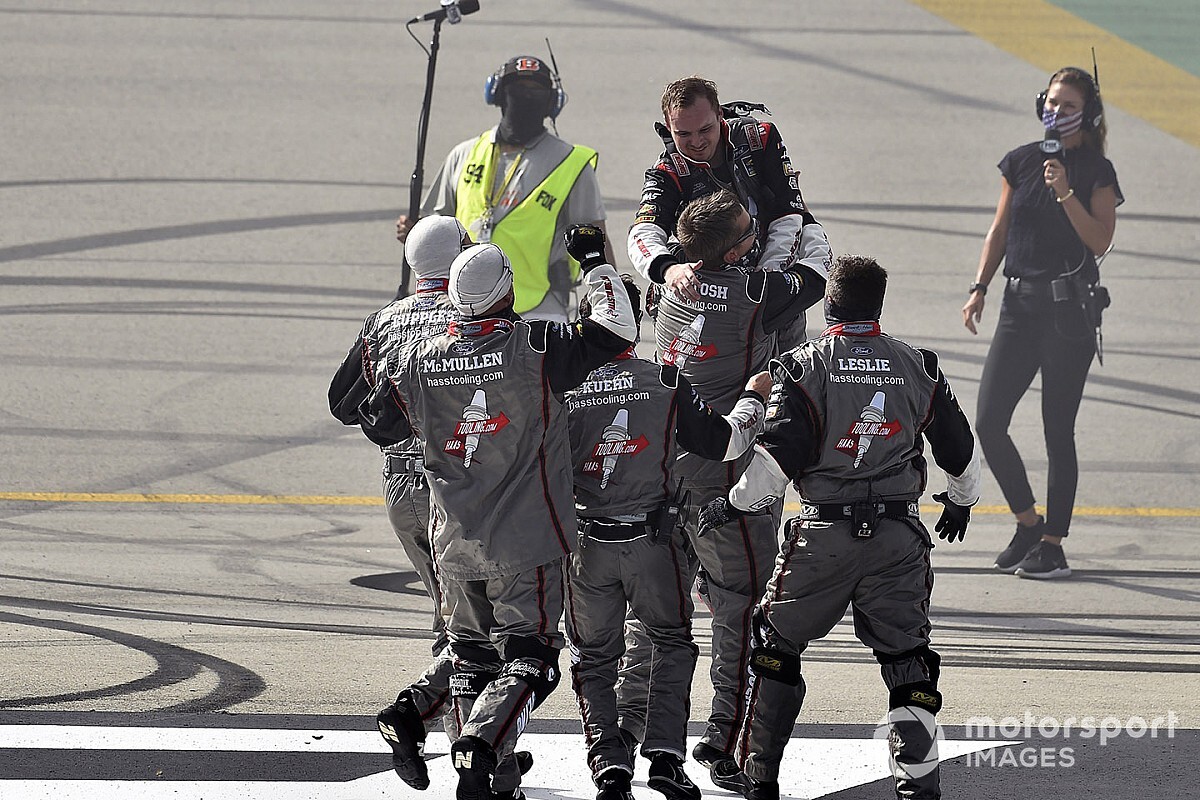 Rookie Cole Custer used a daring four-wide move on the final restart and came away with his first career victory in the NASCAR Cup Series.

Custer, 22, lined up sixth on a restart with two of 267 laps remaining and on the final lap took the field four-wide and came away with the lead, just clearing Martin Truex Jr.’s bumper.

Kevin Harvick, who led on the restart, developed a bad tire rub and dropped out of contention as Custer held off Truex to win Sunday’s Quaker State 400 at Kentucky Speedway.

The win is the first in the Cup Series for Custer, who also qualified for Wednesday night’s NASCAR All-Star Race at Bristol (Tenn.) Motor Speedway.

“We were so good all day. Our car was so good," Custer said. "I mean, obviously, it wasn’t the easiest track to pass on, so we were kind of stuck back there, but that was the best car I’ve ever driven in my life. Everybody at SHR brought an unbelievable car. Gene (Haas), I can’t stress enough how thankful I am for him taking a shot on me. It definitely was not the start to the year that we wanted. We were definitely way off at some places, but this was by far an unbelievable car.

We put it all together and I just can’t thank everybody enough.”

Asked how difficult it's been to adjust to the series under the current conditions with no practice and qualifying, Custer said: "It’s not easy. You’ve got to kind of adapt as much as you can. I think we’ve gotten better and better at that. It’s just unbelievable. I didn’t think we were coming here and win.

"Now we’re gonna be in the All-Star Race. I don’t even have to run the Open. Hopefully, I make it to Bristol.”

In 17 starts so far this season, Custer’s top finishes in the No. 41 Stewart-Haas Racing Ford have come in his last two races (he was fifth last week at Indianapolis Motor Speedway).

Following the break between Stages 2 and 3, most lead-lap cars elected to remain on the track and Keselowski continued to lead on the restart on Lap 168. He was followed by Blaney, Joey Logano, Truex and Alex Bowman.

Kyle Busch reported he believed he had a broken rear shock on his No. 18 Toyota during the caution.

With 90 laps to go, Keselowski worked furiously to hold off a challenge from Truex for the lead while Blaney ran third and Jimmie Johnson had moved to fourth.

After a wild save and more complaints about the performance of his car, Kyle Busch was 24th and the last car on the lead lap with 88 to go.

On Lap 181, Truex went to the inside of Keselowski off Turn 2 to grab the lead for the first time in the race.

With 70 laps to go, Truex maintained a small but steady lead over Keselowski with Blaney in third and Johnson fourth.

On Lap 209, Johnson dived down pit road from the fourth spot to make a green-flag pit stop. He had been complaining of a vibration.

Johnson’s move – which was just within the window to make it to the end on fuel – opened the door for several others to make their final stop, including Bowman and Jones.

With 50 laps to go, several other drivers – including Denny Hamlin, Almirola, Kurt Busch and Almirola – made their stop.

Truex elected to make his top with 47 to go after he complained about his car “sputtering.”

On Lap 229, NASCAR threw a caution for debris on the track from Brennan Poole’s car and Austin Dillon also spun on the track while trying to abort his green-flag pit stop.

Several cars pit, including those who had yet to make their final stop for fuel, and on the restart on Lap 238, Truex cycled back to the lead followed by Blaney, Keselowski, Kurt Busch and Harvick.

John Hunter Nemechek wrecked in Turn 2 on Lap 237 to bring out a caution. Most lead-lap cars remained on the track and Truex was the leader when the race returned to green on Lap 249.

Blaney got out front of Truex on the restart and then Keselowski turned Johnson on the frontstretch to bring out another caution.

On the restart on Lap 255, Blaney led Truex, Kurt Busch and Harvick.

Harvick took the field three-wide after the restart and came away with the lead for the first time in the race.

On Lap 261, Matt Kenseth spun off Turn 4 to bring out the caution just as Truex was closing in on Harvick for the lead.

The race returned to green with two laps remaining with Harvick out front followed by Truex, Blaney and Keselowski.

Keselowski held off Blaney in a one-lap dash following a caution to claim the Stage 2 win.

Custer was third, Logano fourth and Truex rounded out the top-five.

Following the break between Stages 1 and 2, the lead-lap cars all pit with Almirola the first off pit road.

On the restart on Lap 88, Almirola was followed by Logano, DiBenedetto and Blaney. Ty Dillon was penalized for speeding on pit road and had to restart from the rear of the field.

With 60 laps remaining in the second stage, Almirola had built a 1.6-second lead over Logano with DiBenedetto in third.

On Lap 114, Truex – who started the race from the rear of the field – had moved up to sixth while Austin Dillon had advanced to ninth.

Blaney got around DiBenedetto for the third spot on Lap 117.

With 34 laps remaining in the stage, Blaney powered around Logano to move into the runner-up position.

With 27 laps to go, Blaney had cut his deficit to Almirola down to less than a second.

On Lap 138, Blaney went to the outside of Almirola off Turn 4 and moved into the lead for the first time in the race.

With 16 laps to go in the stage, Reddick became the first of the lead-lap drivers to make his green-flag pit stop for new tires and fuel to make it to the end of the stage.

On Lap 155, Kenseth spun through Turns 3 and 4 to bring out a caution with just one car remaining – Keselowski – to make a green-flag stop.

When the race returned to green on Lap 160, Keselowski led the way followed by Blaney and Logano.

Almirola grabbed the early lead from Kyle Busch and dominated Stage 1, earning his second stage victory of the 2020 season.

Chase Elliott was second, Logano third, DiBenedetto was fourth and Blaney rounded out the top-five.

Kyle Busch, who started on the pole thanks to a random draw, led the first nine laps until Almirola got around him to grab the top spot on Lap 10.

NASCAR displayed a caution on Lap 26 for a competition caution to allow teams to check tire wear. All the lead-lap cars elected to pit with Almirola the first off pit road.

The race returned to green on Lap 30 with Almirola in the lead followed by Logano, Kyle Busch and Elliott. Ty Dillon had to restart from the rear of the field due to a commitment line violation.

With 40 laps to go in the first stage, Almirola remained out front and had built just over a second lead on Elliott. Logano ran third, Blaney fourth and Harvick fifth.

On Lap 54, DiBenedetto moved into the fourth spot while Truex ran 10th after starting the race from the rear of the field.

With 20 laps to go in the stage, Almirola maintained about a 2-second lead over Elliott as Logano remained third.

With five laps remaining, Almirola had built a 4-second lead over Elliott while Logano had worked his way back to third. DiBenedetto was fourth and Blaney, driving with a shifter that wouldn’t stay in position, was fifth.

Two drivers had to start the race from the rear of the field due to a two-time failure in pre-race inspection – Kenseth and Truex.