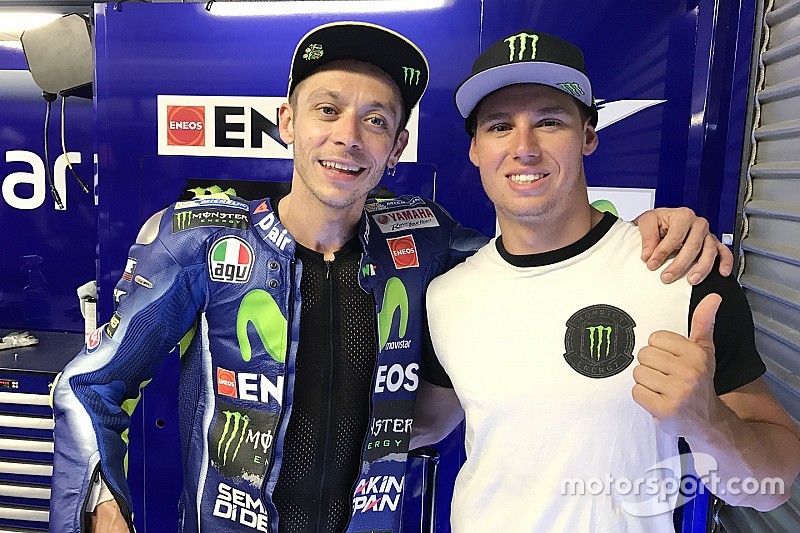 The meeting was organised through mutual sponsor Monster Energy, with Waters watching Rossi go through the first stage of his debrief at the end of Wednesday’s running, before spending a few minutes chatting with the Yamaha rider.

“It was really cool,” Waters told Motorsport.com. “We sat in there for a bit, looked over the bikes, spoke to all his mechanics. He’s an awesome dude, he showed us all over the bikes.

“I spoke to Vale after he’d done his debrief, which was very cool to watch. He was very animated in how he did it all. We spoke for about five minutes, and you can see why he’s a World Champion when you’re in the garage, watching him working.”

Surprised by Rossi’s interest in Supercars, Waters lightheartedly suggested he’d be happy to give the Italian a pedal of the Monster-backed Prodrive Ford.

“He’s really interested in Supercars, so I was answering as many questions about Supercars as I was asking him about MotoGP, which I wasn’t expecting,” said Waters. “We might have to get him in the Monster car for a test.”

It’s the second World Champion Waters has been given the opportunity to meet through Monster, having caught up with Lewis Hamilton at the Australian Grand Prix last year.

Waters added that he feels better prepared than ever heading into what he’s earmarked as a crucial sophomore season as a Supercars full-timer, largely thanks to a trip to the UK to work with renowned driver coach Rob Wilson during the off-season.

“I’ve had an awesome off-season,” he said.

“I’ve been training flat out, so I’m fitter than I’ve ever been. I went overseas and saw Rob Wilson over in England; he’s world renowned, so it was cool to go over there and experience it myself. It was a valuable experience.

“I’ve got everything in my corner now. I have to put it to use. My rookie season is over, it’s time to have a crack and get some results.”