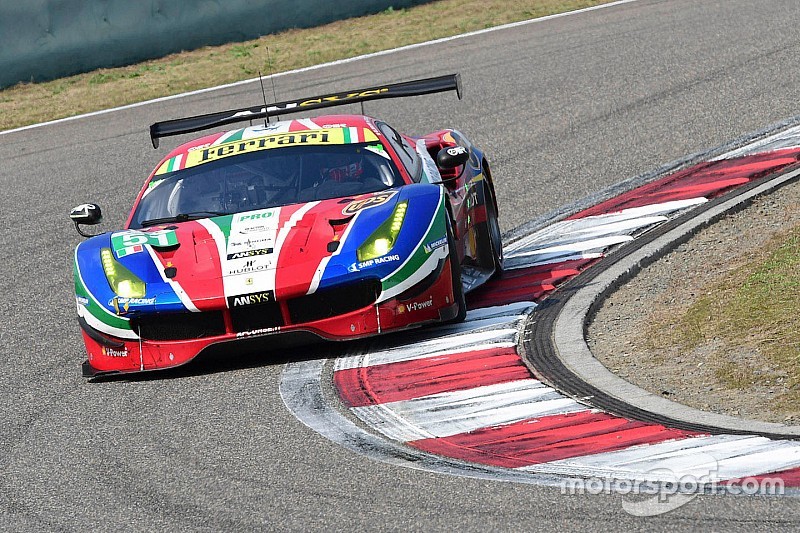 The AF Corse Ferrari team is set to hold a four-way shootout to decide on a replacement for Gianmaria Bruni to race in the FIA World Endurance Championship this year.

The Italian manufacturer will run Alessandro Pier Guidi, Nyck de Vries, Miguel Molina and Alex Riberas on Tuesday at the Vallelunga circuit as it evaluates a new teammate for James Calado.

Bruni has a valid contract with Ferrari, but the two-time WEC GTE Pro champion is known to be trying to negotiate a release so he can become a Porsche driver.

Suspicion that Bruni was looking for a way out of Ferrari was first aroused in December, when he was the only works driver in the Prancing Horse's GT stable to skip the World Finals event at Daytona.

The Italian was also notably absent from the American track for the 24 Hours last month, as WEC stablemates Calado, Sam Bird and Davide Rigon all drove at Daytona for customer teams.

Now it has emerged that Bruni is set to spend at least the first part of 2017 on the sidelines as he tries to find a way out of his Ferrari contract, and will definitely not partner Calado in the #51 Ferrari 488 in this year's WEC.

Pier Guidi, 33, is considered the most likely option to replace Bruni, as he was the third driver alongside Calado and Bruni in last year's Le Mans 24 Hours.

The Italian has also raced extensively in Ferrari's GT3 machinery in the IMSA WeatherTech SportsCar Championship and the Blancpain GT series, and contested the European Le Mans Series last year in a GTE-spec 458 Italia.

However, Ferrari is also believed to be keen to try out a new generation of GT drivers for the future, hence the inclusion of McLaren F1 protege de Vries and Riberas in its shootout.

Molina also is exploring alternative career avenues after being dropped by Audi from its DTM line-up at the end of last season.

Rusinov explains why G-Drive split with Jota for 2017