The drivers of both cars, with Nick Heidfeld, Nicolas Prost and Neel Jani in car 12 and Andrea Belicchi, Mathias Beche and CongFu Cheng in car 13, will be fighting for a podium finish.

Nick Heidfeld and Neel Jani qualified their Lola-Toyota #12 in fourth place for the start of the 6 Hours of Silverstone and claim the first place of the LMP1 Privateer entrants with a fastest average laptime for the two drivers of 1:52.124. 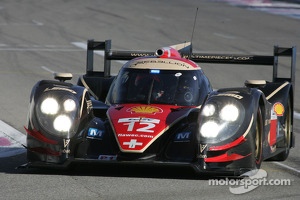 In addition to the second row starting position secured with his Swiss team-mate, Heidfeld defied the odds by recording the second best laptime of the session with a time of 1:43.884 on his last flying lap ahead of three factory cars. Doing this, the German confirmed the pace of the Rebellion cars after securing the fastest laptime of the final free practice session in the morning.

Andrea Belicchi and Mathias Beche, behind the wheel of the #13 Lola-Toyota recorded a fastest average laptime of 1:53.835, putting their car in sixth position for tomorrow’s start.

The drivers of both cars, with Nick Heidfeld, Nicolas Prost and Neel Jani in car 12 and Andrea Belicchi, Mathias Beche and CongFu Cheng in car 13, will be fighting for a podium finish.

The drivers in car 12 will be looking to score maximum points this weekend to take forward with them in their FIA World Endurance Championship campaign.

Neel Jani – Lola-Toyota #12 : “In this qualifying session we experienced for the first time a new qualifying format compared to previous years. We did a non-profitable bet by starting with slick tyres because immediately after the start of the session heavy rain fell.

The track was too wet for this kind of tyre and I had to come back to the pit after my first lap to put on intermediate tyres. Once I had the right tyres for heavy rain conditions, the rain suddenly stopped and the track started to dry out very quickly.

And I had to drive again with unadapted tyres. Luckily, when I stopped, Nick jumped into the car with fresh slick tyres and did his max until the end...”

Nick Heidfeld – Lola-Toyota #12: “It has been a very challenging qualifying for all the team. It was the first time we had to drive with two drivers in a qualifying session. The changing weather had shaken our plan.

I did three good laptimes but I was blocked at the end of my last lap by a Toyota and an Audi that were fighting together. Lots of things that we couldn't forecast... Nevertheless, we put a factory car behind us on the grid.

And it's nice to see that I have secured the second quickest time of the session (after being the fastest this morning). Our main competitors are behind us so we are in a very good position for tomorrow.”

Andrea Belicchi – Lola- Toyota #13 : “It has been very difficult to put ourself into a good position today. Starting the qualifying session with intermediate tyres was not a good choice. The track, very wet at the start of the session, dried very fast and we had to stop again to put on appropriate tyres.

Despite these unpredictable conditions, Mathias and I did a good job. We are in a good position on the grid and the car is fast enough to give us some hopes for tomorrow's race.”

Mathias Beche – Lola – Toyota #13 : “I'm really delighted that the team gave me the opportunity to qualify the #13 car with Andrea. In the changing weather conditions, we didn't make the right choice of tyres. But regarding these special conditions, I'm happy with the result.

Because of the changing weather of the past days, the race conditons are still a question mark for us. We had short time to test the car on dry track configuration. So we'll have to extrapolate this and work to find the good set up for tomorrow.

I feel good in the car and the race at Sebring a few weeks ago has been really profitable for me. I can't wait to take the wheel for the first round of the FIA World Endurance Championship !”

Bart Hayden REBELLION Team Manager: “I am very pleased to have secured the best privateer spot on the grid. I would like to thank the team for their hard work in preparing the cars for this race.

Since our return from Sebring we went to Paul Ricard for the FIA WEC Test introducing the new aero kit and then rebuilt both cars in time for this week-end. I am proud of their efforts, which helped us to get the most out of the qualifying session today.”