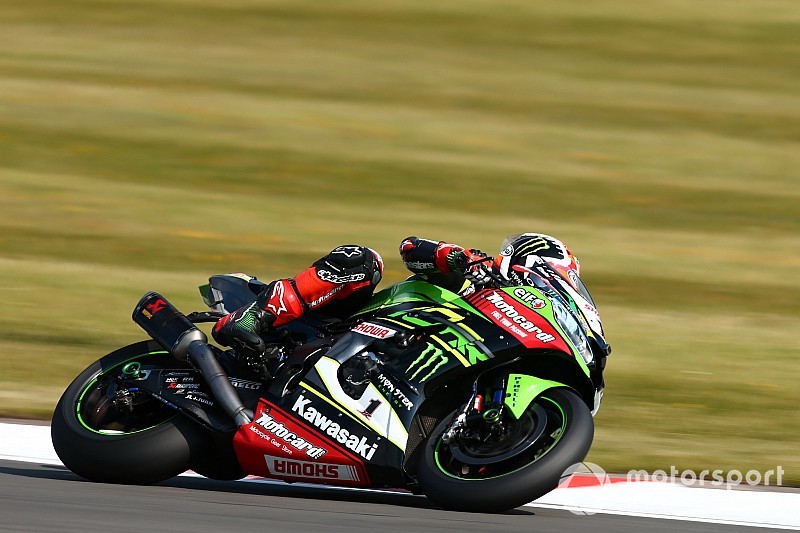 Jonathan Rea fended off Toprak Razgatlioglu in a tense second World Superbike feature race at Donington Park to complete the treble and extend his championship lead.

Just as they did in race two at Misano, Kawasaki duo Rea and Razgatlioglu ran each other close all race, with Rea getting the upper hand after opening up an insurmountable gap on the last lap.

Rea took the lead on the run into the first corner off the line, with Razgatlioglu following him, while Leon Haslam took third away from the fast-starting Alvaro Bautista at the Old Hairpin.

Razgatlioglu passed Rea into the Melbourne Loop on the third tour, and led on the Puccetti ZX-10RR for the next three laps before relinquishing the position to Rea when he ran wide at the same corner.

The championship leader's second stint at the head of the pack was brief, however, as Razgatlioglu re-took the lead on lap eight, having fended off an attack from Haslam on the previous circulation.

Rea and Razgatlioglu ran line astern for the next handful of laps, with the former capitalising on a mistake for the Puccetti rider at the Fogarty Esses to take the lead again on the 12th tour.

Razgatlioglu kept Rea's lead hovering around the three-tenth mark in the latter stages, but could do nothing to deny him victory, as Rea opened up a 0.5s advantage over the final lap.

Bautista dispatched Haslam at Melbourne Loop on lap 13 for third, but only just held onto the position on the run to the chequered flag.

Yamaha's Alex Lowes got to within four tenths of a home podium in fourth, beating Haslam and Ten Kate's Loris Baz.

Tom Sykes recovered from a fourth row start after his exclusion from the Superpole race results to get his BMW home in seventh ahead of Michael van der Mark on the sister Crescent Yamaha.

Chaz Davies ran as high as fourth in the early stages, but slid to ninth by the end of the second works Ducati, with Marco Melandri a further 10s adrift to complete the top 10 on the GRT Yamaha.

Jordi Torres was the only retirement, after his Pedercini Kawasaki broke down at the end of the second lap.

Having taken the lead in the standings for the first time in 2019, Rea now holds a 24-point advantage over Bautista heading to next weekend's US round at Laguna Seca.