Scuderia Corsa charges to the podium in Le Mans debut 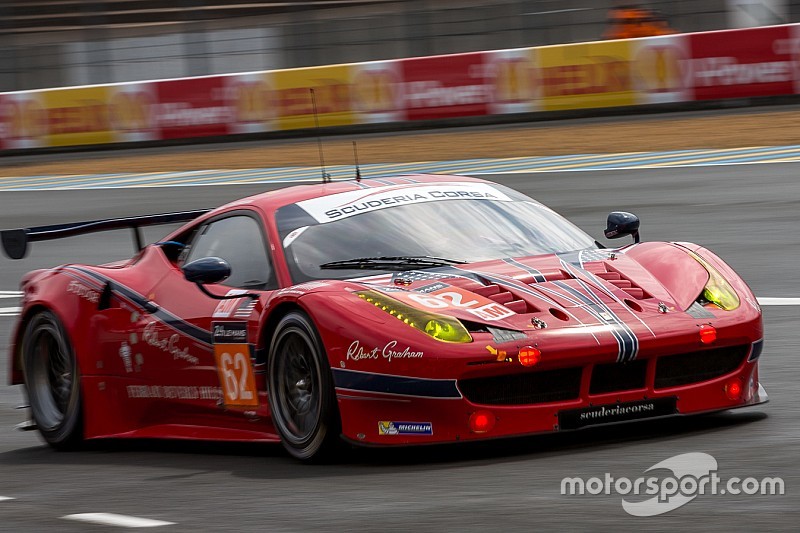 Le Mans, France) - Never give up. This was the Scuderia Corsa motto leading the team to the podium at the World Famous 24 Hours of Le Mans.

After 24 hours of racing, 330 laps of the Circuit de la Sarthe and 25 pit stops, the no. 62 Scuderia Corsa Ferrari 458 Italia took the checkered flag and claimed the final spot on the podium in the GT-Am class in the 83rd 24 Hours of Le Mans.

The run to the Le Mans podium was anything but trouble-free, especially in the final six hours. The team was slowed by a broker starter and, while fighting locked in battle for the final podium position, an overheating engine. Bell was locked into an exciting 40 minutes heavily broadcasted duel and only the engine concern made him backed off.

Normally I should be speechless, but I'm not right now,

When Townsend and I won the 12 Hours of Sebring in 2012 we joked with each other and said 'wouldn't it be amazing to eventually compete at Le Mans?' And the fact that we got here, and we had a shot - we had a real shot - at winning is incredible. For Scuderia Corsa, Michelotto, all of our sponsors, we couldn't have asked for more other than a win, but a podium at Le Mans is a special event. And, it gives us a reason to come back to Le Mans and shoot for the top step. And I've got to thank the crew, the team, and especially Jeff and Townsend. And my family for coming out to cheer us on - they were my true lucky charms."

Bell scored his first Le Mans podium mere weeks after competing in the Indianapolis 500. "It's a great day for us," said Bell. "There were so many obstacles in this race for us. So many times I thought that we were done because of penalties or mechanical issues but we never gave up and we never stopped believing that we could get here. The team deserves a huge congratulations. I mean, this is not only our first time here as drivers but our first time as a team coming together in this way and it's pretty special to do that with a first time group. One thing I learned a long time ago is that the result can never be taken from you. We achieved it together, and it's a special bond with those people forever".

"Ultimately it was a beautiful race," said Segal. "All of us were rookies, and for the team it was their first time at Le Mans, so there was a lot for everybody to learn. We had a tremendously difficult task in front of us to end up on the podium at the most difficult sports car race in the world against the best competition in the world. It's unbelievable. And to think that when we look at third place and we could have had more, it makes it even better. I think we are all hungry for more, and we are already thinking about next year but maybe for a short while we will enjoy our podium and smile a bit."

Scuderia Corsa's result adds another chapter to the long history of success for American Ferrari entrants at the 24 Hours of Le Mans, and provides a foundation which the team hopes to build on in future editions of the race.

"What a fantastic feeling", said Giacomo Mattioli, co-owner of Scuderia Corsa "I'd like to thank Bill for the trust that he put on Scuderia Corsa. IMSA for their endorsement, Ferrari Corse Clienti, Michelotto, Kessel and Michelin for their support. Team did a stellar job and never gave up. I am proud of the international racing platform that Scuderia Corsa has developed."

"It was a great weekend for Scuderia Corsa," said Art Zafiropoulo, Team co-owner. "We have a podium and it's remarkable to accomplish such a strong finish in Le Mans. So happy for Bill, Townsend and Jeff, what a great debut! We are looking forward to future races at Le Mans!"

Scuderia Corsa's next event will be the TUDOR United SportsCar Championship's Sahlen's Six Hours at the Glen on June 26-28 at Watkins Glen International in Watkins Glen, New York. The event will also be the third round of the Tequila Patron North American Endurance Cup, in which Scuderia Corsa is currently second in the GT-Daytona class.