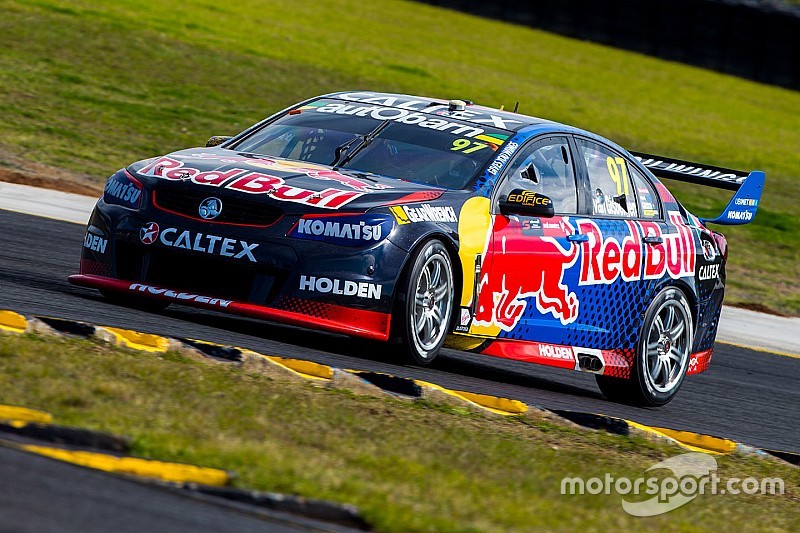 Alex Premat admits the Triple Eight Commodore feels “different” after sampling it for the first time last week, but says he is already up to speed.

The Frenchman will be one of the key figures of the season of endurance, where he will fly in to tackle the three long distance races alongside title contender Shane van Gisbergen.

He will do so having never raced a Triple Eight Commodore, having missed all of the co-driver sessions so far this season thanks to commitments in the United States, and having not taken part in any competitive races since the beginning of the year.

Premat has at least now driven the #97 Red Bull Racing Australia car, having taken part in the team’s ride day at Sydney Motorsport Park early last week. And he says that he is already up to speed, despite the car being somewhat different to the Garry Rogers Commodores and Volvos he is more accustomed to.

“I did plenty of laps. It was nice to be back at the wheel of an Holden car, even if the car ran by Triple Eight is quite different from the one I used to drive in the past,” Premat told Motorsport.com. “The chassis is different, the front end is different, and so is the aero package.

“It took only a few laps for me to take my marks. It is a car that has been developed in every single detail, starting with the set-up, but also to make the driver comfortable which is really great.”

Pressure not a factor

While Premat will be directly involved in the title fight between van Gisbergen and team-mate Jamie Whincup, and despite his lack of recent race miles, Premat has brushed off any notion of feeling the pressure.

“It’s true that there is much more responsibility on the shoulders of the drivers who team up with the championship contenders,’ said Premat

“For me, it doesn't make any difference. I’m heading to those races with the same spirit as the previous years. At the end of the day, the aim is always the same – to win races.”

Premat added that he has no fitness concerns, either – particularly after the Sydney ride days.

“I have no worry about that. I've never had any problem in the past when I raced in GP2, DTM, or in my Formula 1 tests,” he said. “And I train myself all the year in the course of my involvement in the EXR Racing Series that we are developing in Las Vegas with Romain Thievin and David Perisset.

“In Sydney, I completed 60 laps driving the car and I had no aches after that. It is clear that Supercars is a physical series, this is a car that pushes quite hard, but I don't have any particular concern, especially as it is the main drivers who do the majority of the distances during the races.

“Also, Sandown and Bathurst circuits give us the opportunity to relax a little in the straights. The most complicated event would be the Gold Coast race, with its non-stop pace and its walls all around, where there is no real opportunity to release the pressure.”

The seat alongside van Gisbergen might be one of the most high-profile in the championship, but Premat was clear to point out that he doesn’t see it as an audition for a full-time return to Supercars.

“To be back with a full Supercars programme in the future is going to be complicated,” he said.

“But I like my situation; I prefer to run selected races in a top team, rather than having a seat for a entire season with a team that would not permit me to fight at the front.”