Michael Schumacher was in philosophical mood when he met the media in the Shanghai paddock this afternoon. "Even without the results, there have been some good moments and some fun moments this season," said the outgoing champion. Michael ...

Michael Schumacher was in philosophical mood when he met the media in the Shanghai paddock this afternoon. "Even without the results, there have been some good moments and some fun moments this season," said the outgoing champion. 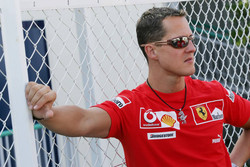 "Monaco for example was a race I enjoyed. But we knew our situation would have to change sooner or later. But if you look at the end result, this year is not so bad. We have claimed third in the Constructors' championship and I am currently third in the Drivers.'"

The question of the qualifying format has been a major topic of discussion in recent weeks and Schumacher was asked for his opinion. "I think there have been about seven format changes in the last five years," he calculated. "I think that shows there is no optimum solution and so the matter should be given a lot of thought before a decision is made."

And the obvious question: would he miss Barrichello after this weekend? "Miss him? I don't know if that is the right word, because he is not leaving the sport," commented Michael.

"But he will not be my team-mate and we did have a good time together, but I really don't feel he is gone and I am sure I will still see as much if not more of him at parties and other events. We had a successful time together and I hope that continues with Felipe."

As for this weekend, Michael was not sure what to expect: "It could be like Brazil, or it could turn out like Japan." Next weekend, he too will be at Mugello for the Ferrari World Finals. "This has always been an important event and a way to say thank you to the fans," he stated. "In fact, it will be even more important to do that this year, than in the past when we were winning."

Last race with Ferrari for Barrichello

Live: Follow the United States GP as it happens