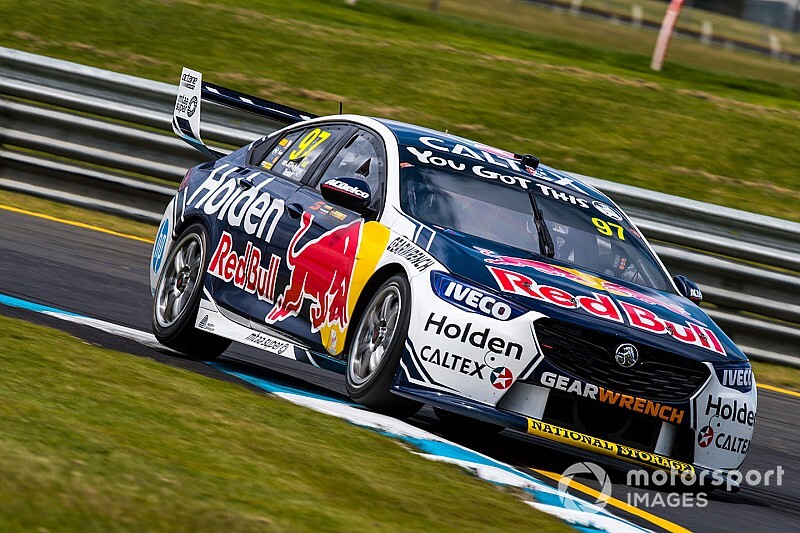 Triple Eight will analyse what it believes was a 'self-inflicted' suspension failure on Shane van Gisbergen's car in the closing stages of the Sandown 500.

The Kiwi and co-driver Garth Tander were cruising to a sensational victory at the Melbourne circuit, having completed a remarkable comeback from 24th on the grid.

However the charge was stopped in its tracks 10 laps from the end, a right-rear damper issue forcing van Gisbergen into the pits.

According to T8 boss Roland Dane the issue has been traced to the bottom of the damper, however determining its exact cause will require further analysis.

"Something came loose on the bottom of the damper," he said. "I’m not sure exactly what and why. I’m sure we’ll find out during the week.

"These things happen in motorsport. The big thing is to analyse it properly and understand why.

"We’re pretty sure it’s self-inflicted, but we need to understand. It’s nobody else’s fault, it’s ours, somewhere."

Van Gisbergen says he knew it was a spring or damper failure as soon as it happened, the car failing to re-settle as he came off the last corner.

But while the car didn't feel too bad, he reckons the sheer amount of smoke coming off the tyre as it rubbed against the guard was giveaway that he wouldn’t be able to limp to the flag.

"I thought I had good traction when the car hooked up [off the last corner], but then it never came back," he said.

"I knew something in the rear had fallen out, but the way it tracked and didn’t move around, I knew it was safe.

"I took it easy [at Turn 6], but you could feel on the right-handers when it got off that side it was still fine.

"But how much smoke there was, I knew it wasn’t going to last."

With the Melbourne circuit set to lose its enduro status next season, that race could well have been van Gisbergen's final shot at winning a Sandown 500 crown.

When asked by Motorsport.com how heartbreaking it was to go so close, he said: "I’ve got no words."

Dutton reflects on Triple Eight's 'slogging it out' season