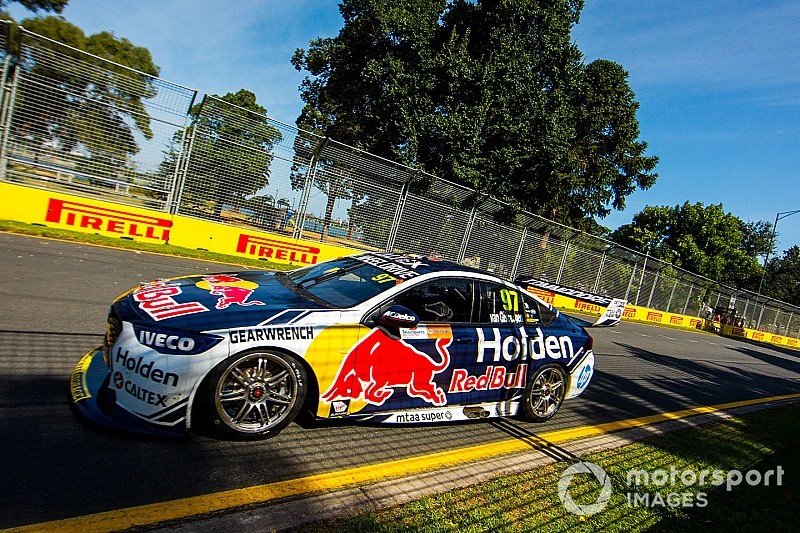 Triple Eight has confirmed that it was an engine failure, not a transaxle failure as first through, that took Shane van Gisbergen out of today's Supercars race at Albert Park.

The Kiwi rolled to a stop with three laps remaining in today's 25-lap feature race at the Australian Grand Prix, having been set to finish at least fourth thanks to a well-executed overcut strategy.

While it was initially reported that the car lost drive due to a transaxle issue – potentially controversial given the series has just introduced a new Xtrac control unit – the team has since discovered that it was an engine failure that left van Gisbergen stranded.

"It's not the transaxle, it's the engine," said T8 team manager Mark Dutton.

"We don't know what exactly, but it was a catastrophic failure that caused Shane to not be able to continue.

"It's very unusual. We'll replace [the engine] tonight for tomorrow, but we'll also dig deep to understand what component failure has happened to cause that knock-on effect.

"I can't remember [the last engine failure]. The only real ones that spring to mind engine-wise are more electronics letting us down. We've had a few throttle position sensors and the like.

"But as for mechanical engine stuff, touch wood we're pretty rock solid there."

Dutton added that the fact that today's race was one of two 25-lappers worth 100 points, rather than one of the 13-lappers with 50 points on the table, contributed to the disappointment.

"You're disappointed at any stage, but on this weekend, with races being worth different points, and particularly on car #97 with some differences in starting positions race-to-race... we would have much preferred it to be in Race 2 or Race 4 when it's 50 points not 100 points," he said.

"That said, you never want it to happen.

"We've all been working really hard, including [engine builder] Kenny McNamara and the engine shop, to make sure we don't have any DNFs – and we've clearly had one now.

"We'll step it up throughout Triple Eight and the engine shop and make sure it's a one-off."

The DNF has dropped van Gisbergen from second in the points to fifth, 142 behind leader Scott McLaughlin.