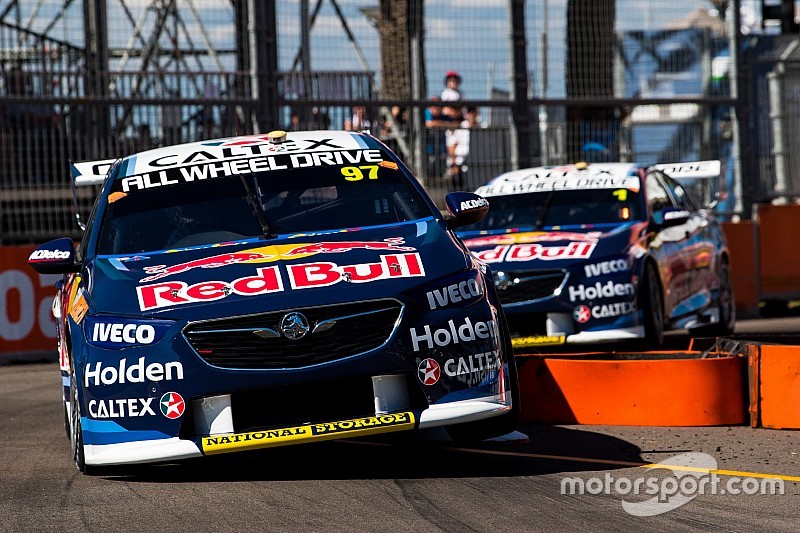 Triple Eight team manager Mark Dutton says the team will assess the impact that the controversial Newcastle penalty had on its performance in the Supercars title decider.

Having stormed to a last-lap win on the Saturday in Newcastle to create a winner-takes-all title fight on the Sunday, Shane van Gisbergen's hopes of a second crown were dented by a refuelling infringement that led to a 25-second post-race penalty.

With the Red Bull Holden driver dumped to fifth in the Saturday classification, all rival Scott McLaughlin needed was to finish sixth or better on the Sunday to claim the title even if van Gisbergen won.

Not that it mattered; van Gisbergen could only manage fourth on the Sunday, which let McLaughlin stroll to the championship with a conservative second place.

Speaking immediately after the finale, van Gisbergen admitted that he felt like the penalty had taken the buzz out of both the T8 garage and the event as a whole, while team owner Roland Dane described the saga as "demotivating".

While dismissing any notion that the team gave up, Dutton admits the penalty was a 'body blow' to the crew – the impact of which will be the subject of a review.

"You always feel you’re in the fight," he said about the team's Sunday mentality.

"Clearly with the quality of DJR Team Penske and Scotty, you know for them to have to finish worse than sixth and you win it is a long shot.

"Of course you take a fairly hefty body blow with that one, but we’ll have to review and see if our resilience is good enough to deal with those sort of situations and those things arising.

"It is difficult, I’m not going to lie, but the team did a fantastic job, all the crew. It’s not just the engineers or the drivers who take the hit, obviously the whole team does, and I was really proud with the way the team prepared.

"Even after the news came through [on Saturday night], when there was an air of doubt about it, everyone was cracking on with almost business-as-usual.

"It always is a bit of a difficult body blow to take."

When asked if he agreed that Sunday's race may have gone differently without the penalty, Dutton said: "I think if the pointscore was different then you’d have a different outcome.

"The water is never going to run down the hill the same way twice, it’s always going to be a little bit different from where you’re starting from.

"I think it would have been a more interesting race if it’d been closer.

"Based on what Shane said alone, there might have been some differences [in how it unfolded]."